Vermont history and the history of the Phineas Swann Inn & Spa at the base of Jay Peak Resort in inexorably intertwined. The house is 135 years old and has operated as a bed and breakfast since 1986.

The original farmhouse and carriage house were built between 1847 and 1891, by William Stiles. Based on the lathe and plaster construction, the barn assembly, and the exposed heavy fir internal beams, the construction date is estimated to be around 1880. In 1886 he sold the property to Benoni Laperche, who two years later resold it to Harrison Manosh. 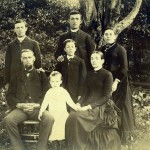 In 1895, Mr. Manosh sold the property to Horace & Emma Marcy, and it remained in the Marcy family’s care for four decades. Initially, the Marcys and their children lived in the home, and the photo at the top of this page shows Mr. and Mrs. Marcy in front of the Phineas Swann house around 1900. Later as the children grew and moved out, and after the death of Mr. Marcy around 1910, Mrs. Marcy often rented out rooms in the house and barn to workers and employees of C.T. Hall, the “Lumber Baron of Vermont,” whose home next door (now home to The INN restaurant) was constructed in 1890. In 1893 the house that became our River House was constructed to house additional workers, along with several other houses along the Trout River. 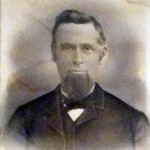 After Mrs. Marcy’s passing, the farm house and barn were purchased by Louis Martell in 1935 for $795. Mr. Martell had served as chauffeur to Mr. Hall, driving and taking care of his Stanley Steamer, the first motor car in northern Vermont. Later, Mr. Martell saved up enough money to start his own business, a garage, which existed on the site where the current Sylvester’s Market sits. The horse barn at the Phineas Swann house was converted into a four-bay garage so that Mr. Martell could bring work home with him. The Martell family lived in the home for for 42 years before selling it to the  Sylvester family, who owned it for almost a decade.

The House Gains A Name and Becomes a B&B

In 1986, the Sylvester family sold the house to Richard & Helen Kortea, the first to operate the home as a bed & breakfast. In 1989, they sold it to Francis & Maureen Kane, who named it Phineas Swann Bed & Breakfast after one of the town’s founders.

Three years later the Kanes sold the inn to its third set of owners, Glen Bartolomeo & Michael Bindler. Glen & Michael made extensive improvements, including adding the Bulldog and Birch suites to the lower floor of the barn in 1999 and rechristening the building “The Carriage House.”

A year after Michael’s much-too-early passing in 2004 from a stroke, the Phineas was sold to its fourth set of owners, John Perkins & Jay Kerch, who continued the tradition of making improvements. They added a full masonry fireplace to the living room, a 12-foot octagonal screened gazebo (perfect for weddings and civil union ceremonies) and a hot tub with pergola. They also added the Terrier and Green Mountain Suites to the Carriage House in 2010.

In 2013, Lynne & Darren Drevik became the Phineas Swann’s fifth set of owners. Like their predecessors, they have already made several improvements, including creating an outdoor seating area next to to the hot tub and remodeling several rooms and suites.

In 2014 the bath in the Bulldog Suite was remodeled and hardwood floors were installed in the Black Bear Suite. In 2015 the baths in the Black Bear Suite, Red Room and Blue Room were remodeled, and hardwoods were added to the Honeymoon and Terrier Suites. The Library has been remodeled and rechristened as The Study, doing double-duty as a private study for guests as well as a 10th bedroom when needed.

In 2017, the bathroom of the Birch Suite was gutted and remodeled with a modern dual couples’ shower. In 2018, new stairs and decks were put on the River House, and the following year, all the railings and back deck of the Main House were rebuilt.

In December 2020, the Phineas Swann will unveil its biggest project to date: The SpaVermont Day Spa. This 1,500 square foot space will provide both Phineas guests and others with massage studios, treatment rooms, mani/pedi stations, relaxation rooms, a sauna and hot tub and more. The building will also house a new Honeymoon Suite with a great view of the Trout River.

The Friendly Ghost of the Phineas Swann

For those who love staying in a haunted house, our Vermont Bed and Breakfast will be sure to please. Make sure to ask for the Red Room, as this is reportedly the favorite “haunt” of a playful young ghost named Geraldine. Geraldine was a member of the Martel family who passed away of pneumonia in 1937. She must have been a very happy little child, since her only “appearances” are her periodic giggling and the tickling of our guests’ feet late at night. Perhaps this is a gag she played on her parents, as this was normally their bedroom. Several people have witnessed this event, and it is one of the things that makes the Phineas Swann Inn so special! Over the years, many members of the extended Martell clan have stopped by to visit us and fill us in on many facts of their family’s many happy memories in this wonderful old farmhouse!!! 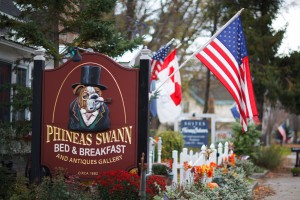 Affirming that he’s a first-class pooch, the fabrication team at Spring Valley Signs framed Phineas with an incise-carved, 23k, German-goldleaf arch, and incorporated slightly curved, gilded, primary text and secondary text decorated with brilliant-white artists’ acrylic paint. Burnet said it was one of the most enjoyable signs the shop has fabricated.

In fact, if you tour the grounds you can find all three of the signs that have stood out in front of the Phineas Swann. The first is of an elderly man stooped over a cane, the second a beautiful pink swan, and the third the current sign that sits out front.